Ask The Experts: Setting Up a VR Lab

Once you have the funding for your VR lab, you will need to set up the physical space.

VR training experts, Tracy Chesney and Devin Marble, have set up several VR simulation labs and have learned from their experiences about what to do and what not to do, whether your lab is for nursing, EMS, or something else.

The software they used in their labs was VRpatients, a fully customizable virtual reality training simulation application for EMS, nursing and the military. 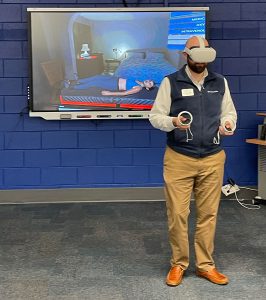 “Space is an issue at any facility, whether it’s hospital or education-based,” Chesney says.

She says the minimum space for a simulation lab is around 440 square feet.

“In my first lab, I built ten stations in 440 square feet because all you need for each student is a six by six foot space.”

Marble says that is the minimum, and recommends more space per station if it is available.

Chesney put 22 headsets in her second lab, which was a much bigger space.

People need room to move around.

“A lot of immersive technologies give you the ability to take a few steps and reach around something, duck under something or lean forward to see something, and you really want to be safe,” Marble says.

Allowing students to stay in the virtual world and fully suspend their reality is important.

Both Marble and Chesney recommend carpeted spaces, both for comfort and safety.

“I worked in a lab that we built in New Mexico that had tile floors and I have to tell you, standing on tile is hard on the legs,” Chesney warns.

It can also be dangerous for the technology.

“Someone is bound to drop something. They’re going to drop a headset or a controller and it’s going to crack. They are plastic and are pretty robust and can handle a few things here and there, but eventually they’re going to break,” Marble warns. “You want some sort of soft and padded floor.”

Colored tape is also a way to separate areas and mark the center spots of each station.

Overhead lighting is good, and not too many windows.

Not all computers are created equal and educating your IT department about your specific needs is a must.

The computers your department uses for other things probably won’t be enough to handle the requirements of virtual reality.

“You should definitely have a gaming computer that can handle the graphics,” Chesney advises.

Both Chesney and Marble recommend having monitors or televisions where instructors or other students can observe what the student is seeing in the VR headset while working through a clinical case.

“A lot of these VR headsets will transmit wirelessly and all you need is something plugged into the back of the TV or monitor to get a receiving signal to view what the student is doing in virtual reality,” Marble says. “This provides the trainer with multiple benefits including recording the session to show later or broadcasting what the students are doing into a room. Then students who are about to go next can see what’s happening and be prepared.”

Since each station needs a computer and a place to charge or plug in headsets, power is a must.

“You really have to think about where the plugs are at and how they are spaced,” Chesney says.

She worked with her facilities department to come up with a plan.

“We had them come in and drop plugs from the ceiling so we could have tiny poles that come down with electrical outlets on all four sides. What was really nice is we were able to hang the headsets and the controllers off the poles.”

“This is another reason having a single VR setup ready to demo for leadership is a life-saver.” Devin added  “I once needed facilities to attach VR cables to the ceiling so students wouldn’t trip over the VR cables. It sounds like a simple request but facilities never wants to attach anything over people’s heads. Before I even asked them, I offered to put them in the VR demo to try it out themselves. It was their first time in VR and their minds were blown. Facilities immediately saw the value for student learning and when I eventually asked for the favor, they were already on board. Have a demo ready at all times!”

Keep Obstacles Out of the Space

The space needs to open without things for people to bump into.

“You want your computers on something mobile like a workstation on wheels, or maybe a wall (or pole) mounted device,” Chesney suggests. “You really want the space free to be able to turn and move around and not worry about running into anything.”

Luckily, the technology itself sets a barrier boundary and will let the user know if they are outside the boundary and out of the VR world.

Chesney suggests a separate wi-fi network for your simulation lab.

Initially, Chesney says her lab was on the main wi-fi network for the school, but it didn’t work well.

“It’s a full immersion. If you’re in the middle of a case that’s pretty intense and trying to problem-solve and keep your patient safe, and all of a sudden you lose that wi-fi connection, you lose that train of thought. When it picks back up, you need to rethink. It’s like going down a highway at 60 miles an hour and then coming to a screeching halt.”

A lot of electronics in one room can warm things up quite a bit.

“When you get 22 computers running 22 headsets plus the overhead lights, the room can get a little toasty,” Chesney says. “You want to keep that room cool. Not cold but definitely cool.”

Facilities might need to install separate room air conditioners or find other ways to keep the room cool.

The technology in a VR lab is pricey so you want to make sure it is secure.

“We didn’t want have to pack these up every day and put them away. That’s a lot of time to set up and take down, Chesney says. “Make sure the room is locked and secured every night and control who has keys.”

If you’re interested in more information about VRpatients or want to talk to our experts, click on our request a demo button and complete the short form.